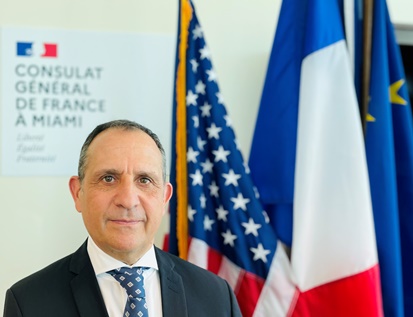 Vincent Floreani took over as Consul general of France in Miami on February 1st, 2022.

An alumnus of the “Ecole Nationale d’Administration” (ENA) (1999), Mr. Floreani was assigned to the United Nations in charge of Iraq, Libya, and the reform of the Security Council.

In 2002, he became First Secretary at the Permanent Mission of France to the United Nations in New York as Expert at the Security Council.

Starting from 2005, M. Floreani was then Head of the Press and Communication office at the French Embassy in London. Then, he became an Exchange Diplomat at the British Department for International Development from 2007 to 2008.

In 2008, he was appointed Deputy Head of Mission at the Embassy of France in Abu Dhabi (United Arab Emirates).

Earlier in his career, Vincent Floreani served in Romania, Indonesia, Kenya and Uganda.